Izzynterview With My Sister Vicky

This interview of mine is going to be a little different, I actually decided to interview my baby sister Vicky. She's literally one of the coolest people I've ever met (she's gonna think I'm taking the piss but I'm really not) and definitely the funniest person I know. I hope you enjoy getting to know her a bit better... 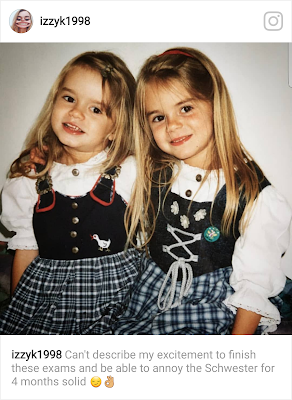 She told me not to post a picture of her,
but couldn't resist this little throwback ;)

She's also made one or two guest appearances on my channel

1. It's safe to say you're talented in a lot of things. What is your favourite hobby?

Aw, what a compliment! Um, my favourite hobby is probably reading. As much as I love writing, I think that there's something so special about picking up a book somebody else wrote – whether that was one year ago or fifty – and reading it and being taken to a different world like that. I like to go back and reread my favourite books a few times a year because I never really get bored of them.

2. Since you're so big on writing, would you ever consider starting a blog of your own?

Absolutely! Its actually something I'm hoping to do once the new academic year kicks off again and I get into a routine. I'd love to do book reviews and talk about my own writing techniques, what does and doesn't work for me etc.

3. I think it's safe to say you never sit down for one minute, how do you manage your time effectively?

I like to bullet journal a lot, which is a technique I discovered when I was doing my A-Levels. I'm a big fan of making lists and breaking down big tasks into smaller ones, which means I can tick them off quicker. It also stops me from getting stressed out – the more tasks I complete, the more motivated I am. I also have a very short attention span so I tend to be productive in twenty-minute chunks. I work on something for twenty minutes, then have a three-minute break, and then go again. After every productive hour I take a longer break. This is something that really helps me and stops me from getting burnt out.

4. No one likes animals more than you. What's one pet you're hoping to get in the future and what would you name them?

Obviously, one of my #LifeGoals is to be able to afford my own horse. But in terms of an actual 'pet' -pet at the moment I'm a bit obsessed with the idea of getting a golden retriever called Teddy. I love dogs and we've never had one before, so as much as I like the idea of adopting from a shelter, I'd love to get one from a puppy so I get that experience and be a bit more prepared for when I feel ready to adopt one.

5. Apart from German and English (both me and my sister are bilingual) what language do you wish you could speak?

I've always loved the idea of being able to speak in Latin. I'm not sure if it's a language that's actually spoken anymore of just written, but I think it's so cool and interesting how it's the basis for so many other languages out there. So, basically I'm cheating a bit there.

6. Name something you're working on at the minute

I'm working on building a family home for my expanding Sims family. It's very important to me. I really want to spoil them. And, apart from that, I'm also chipping away at a draft of a story I've been working on for a while now.

7. Now that you've finished your first year at university too, what would you say your favourite university moment has been?

There's lots of things, but it's probably just something all together like the movie nights where me and Abi, my flatmate, would just do face masks and watch chick-flicks in my bed with lots of popcorn.

High Five by Sigrid is a banger. I've also spent a lot of time recently listening to the Hamilton soundtrack, so I would say Non-Stop from there, too. And Easy to Love by the Jezebels will forever be a banger, and is probably one of my favourite songs ever.

9. I'm your big sister, I have to embarrass you in this interview. What is the cringiest thing you've done?

Oh please, please don't ask me this. I'm such a cringey person in general. I think the answer would have to be that I originally made my FaceBook account for my cat, as a loophole because my mum wouldn't let me make a FaceBook account for myself because I was too young. I was a bit jealous that everyone else seemed to have one and I was missing out (I really wasn't). So then everyone started to get friendship requests from 'Fidget Knight'; my first status was Just got castrated. Ouch! And it's still out there.

10. What is one goal you're hoping to achieve in the next year?

Can I be basic and say that I want to grow my hair out? I'd also really like to improve my marks on my course from last year, and read 50 books. And join the gym! So – lots of goals.

So thank you very much Smelly (sorry had to embarrass you a bit Vicky) for taking part in this interview. I hope you enjoyed reading,